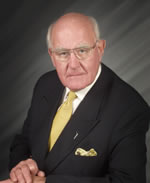 According to orthopaedic consultant and sales education instructor John Tilling, his symptoms were “textbook” osteoarthritis. Hours spent on squash, racquetball, and tennis courts had contributed to the gradual deterioration of his hip joint surfaces. After enduring 10 years of progressive pain and increasingly limited movement, he took the advice of the orthopaedic surgeons he works with and agreed it was time to “get that hip fixed.”

When it came to choosing a surgeon, hospital, and hip system, he was in familiar territory. As a former Stryker sales rep, he had worked with the surgeon who designed the Exeter® hip system. Over the years, he had been involved in Exeter® workshops, observed Exeter® surgeries, listened to papers, and reviewed clinical results. However, even though he had a lot of confidence in the system, he knew it was most important to find the best and most experienced surgeon and let him recommend the implant.

His search took him back to the United Kingdom and the hospital in the city of Exeter® where it all began in 1968. Three years after receiving a hybrid Stryker Orthopaedics total hip device, consisting of an Exeter® hip stem and an ABG®* pressfit titanium cup, this 67-year-old is making the most of his newfound mobility and has resumed his life.

His left hip will most likely need replacing in the not-too-distant future. He is confident the results will be more of the same.

*ABG® is not available in US.

Stryker Corporation or its divisions or other corporate affiliated entities own, use or have applied for the following trademarks or service marks: ABG, Exeter and Stryker. All other trademarks are trademarks of their respective owners or holders.