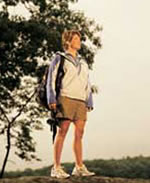 “It’s tough to sell when you’re in pain,” says Kelly Dyer. The more the femoral head in her right hip deteriorated, the harder it was for the former Women’s Team USA Ice Hockey player to get excited about the line of sticks and equipment she sells for TPS Louisville Hockey. “All I could think was ‘I can’t wait to get home and get some ice on this hip,’ ” says Kelly. “It really started to bother me.”

Working trade shows was torture. Even getting in and out of her car after long trips required letting her leg hang out the door for awhile before she could put pressure on it. Worn out by the end of the day, her social life suffered, too. No longer able to take long walks or bicycle rides, she tried to keep active with occasional, moderate sailing and kayaking. When offered Boston Bruins game tickets, the longtime fan and one-time Olympic hockey advisor would think, “Stairs … parking lot … no, thanks.”

After trying medication, physical therapy, lifestyle changes, and several preliminary surgeries, the 38-year-old athlete was convinced replacing her failing hip was the only way to get back to actively living. Her surgeon recommended the Stryker Orthopaedics ceramic-on-ceramic Trident® hip with a titanium stem for its potential longevity and active wear benefits.

Recovering from surgery at New England Baptist Hospital, she was excited to find herself “not complaining about my hip at all.” She looks forward to easing back into her favorite, least aggressive sports, possibly sailing and getting back to coaching this summer at her women’s hockey school. For Kelly, the transformation has been “pretty amazing.”