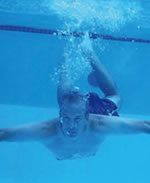 With Trident® Hip, Active Dad Gets Back to Basics

For Paul Noone, 42, being a dad is more than a spectator sport. As the devastating pain in his hip made it increasingly difficult to play with his two sons, eight and six, and caddy golf tournaments for his 10-year-old daughter, he was anxious to set it right.

Avascular necrosis in his right hip had cut off the blood supply to Paul’s femur, causing the bone to die where it meets the pelvis. Paul’s doctor compared his collapsed femoral head to a broken ping-pong ball with jagged edges. Over an 18-month period — while he interviewed surgeons to get to the root of his originally misdiagnosed condition — he lived with intense pain, which made it difficult to walk, sleep, golf, or play with his kids.

Research led him to a surgeon involved in the Stryker Orthopaedics Trident® hip trials, whose volume, outcomes, and access to technology inspired him to schedule the first available date. Within days of receiving a ceramic-on-ceramic Trident® ball and acetabulum, he slept through the night for the first time in months. Soon, he hopes to resume his golf schedule, which had gone from 63 rounds a year to less than four. And, he looks forward to keeping up with his kids again.

“I can’t imagine what it was like before they had surgery like this,” says Paul. “Living with constant pain just breaks you down. I’m always telling people how grateful I am.”