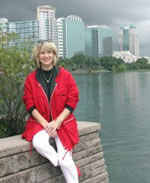 A former television anchor and most recently the author of two popular Florida travel books, Robin Chapman, 53, is used to making appearances. For five years she gritted her teeth and appeared to be okay. But by the time she was diagnosed with advanced avascular necrosis, which had restricted the blood flow to her hips and severely deteriorated her joints, her surgeon couldn’t believe she was even walking at all.

As it became increasingly difficult to get in and out of cars, sit through plane trips, ride her bicycle, go to the gym, sleep, or even walk across a room, Robin went from public personality to private pain sufferer. Now, after bilateral Trident® hip replacements, she’s pain-free and back to her energetic, social self. “This surgery,” says Robin, “has given me back my life.”

“They say this is an elective procedure,” reflects Robin, “In my case I don’t think it was. For somebody like me who has led such an active life, it was a devastating picture of the future. It’s tough to write travel books and make public appearances if you’re in too much pain to leave your house.”

Now, Robin feels she can do anything, even return to daily journalism if she’d like to, where she’d be chasing stories and rushing in and out of “live” trucks. Supported by ceramic-on-ceramic joints her surgeon calls “as beautiful as a German sports car,” she’s regaining lost time. “And now if you average the age of all my body parts,” she says, “I am actually younger than I was before!”