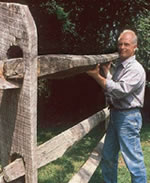 Trident® Hips “A Gift” Worth Waiting For

Carl J. Savino, Jr., loves a story with a happy ending. After 30 years of living with a painful circulatory disease, which had deteriorated the top of his left femur — and had eventually broken down his right hip — the 52-year-old feels like a little boy who finally got the bicycle he hoped to find under the Christmas tree. And the best part is he can ride it, too.

For years, Carl’s doctors encouraged him to put off surgery. Resigned from age 22 to a life of limited activity — no running, jogging, playing tennis, or golfing — he settled on taking increasing doses of Motrin to combat pain and arthritis. As his condition worsened, the Pennsylvania-based funeral director began asking for backup whenever jobs required lifting, carrying, and walking up and down stairs. The pain had permeated all areas of his life.

Now, after having both hips replaced with Trident® ceramic cups and titanium stems in a single operation, Carl focuses more on what’s possible than on what’s prohibited. “It’s such a thrill to walk without any pain,” says Carl. “It’s almost too good to be true. I hope this ‘bike’ I’ve been given never disappears or gets taken away. That’s how I feel about my hips. I never thought I’d feel this well. It’s a miracle — just a great, great thing.”