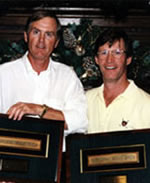 After injuring his knee while skiing in 1968, golfer Jay Litty went through three operations to remove cartilage and seven arthroscopies to “clean out” bone chips and scar tissue. By the mid ’90s, he was lucky to be walking — his knee was “totally gone.”

Even when he lost use of his left leg and could barely get in and out of a car, Jay postponed implant surgery for another three years. “I never was sure about it,” he says. “If I’d have known the benefits, I would have done it a long time ago. My quality of life has changed so dramatically.”

In fact, Jay’s recovery has been so spectacular, his surgeon calls him his “poster child patient.” Three days after he received his Stryker Orthopaedics Duracon® knee, he walked himself down two flights of stairs to rehabilitation. Three intensive days later, he went home. Four weeks of long hours in outpatient rehab prepared him to hit golf balls again. On day 66, he played an 18-hole game without a cart; 30 days later he won a member/member, 36-hole tournament with his surgeon, Dr. Mark Powers, as his partner. Jay, who had continued to play daily with a swing that bypassed his left leg, is thrilled to get his old game back. “I tell friends who have bad knees that waiting is not the answer,” he says. “Waiting sends your quality of life backwards. I want to go forward.”