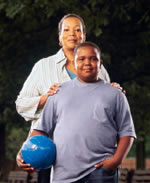 Back in the Swing of Things

Charisse Green is a woman with a zest for life. An active matriarch, she loves her children unconditionally, all five of them. The operative word here, however, is active because, as Cherisse says, “You can’t be down and off your feet when you have an eight-year-old.”

Before her surgery Charisse felt both the pain and the psychological limitations that come with it. Even the most mundane activities were becoming impossible. But it wasn’t just her body. The scope of her whole world was shrinking. “I felt so limited that my mind wanted to do something and in my heart I wanted to do something, but physically it just could not happen. Between the swelling and the limited mobility in the bending of my knee, getting up off a seat was even a chore.”

After years of enduring the pain she decided that a total knee replacement was the way to go. First she had to find a doctor she could trust, but fortunately she didn’t have to look far. Her sister had had her hips replaced and the surgeon she used made a strong recommendation. Almost immediately after the operation Charisse reported that her pain was gone. She quickly started on a program of rehabilitation, but she mainly credits the skill of her surgeon and the design of the Stryker knee with her positive response to surgery. “I would say it took me two weeks before I was back to full movement. I was walking up and down the stairs. It’s been a very quick recovery. And between my cooperation, the skill of the surgeon, and the piece itself, it’s a very good combination. It’s a trifold thing, and without one with the other, you’re not going be where I am today.”

So just where exactly is Charisse today? Happily reengaged with her active life. “I can pick things up, bring my laundry up and down, I can stand, I can wash dishes and scrub the floors. I can take down my blinds, I can climb up on a stepladder. I had the surgery March 30th — May 22nd I’m on the dance floor boogying to disco music.”

Since the surgery, Charisse has lost weight, become active again, and has her life back with a whole new positive attitude. She has this to say by way of thanks to the people at Stryker for the difference they’ve made in her life. “I could do everything I wanted to do, so you guys, you’re good guys, keep up the good work. Thank you.”